Note: This is a digital product. The firmware and instruction will be sent to email you  specified in the order within a maximum of 24 hours.

The following symptoms can be improved by the latest software (Ver. 70.00.335C). Improved symptoms depend on current software versions.

• In the CMU update package, latest Gracenote® database has been included.
• With the improved software, System Update screen menu shows “Update package” instead of “Reinstallation Package”. “Fail-Safe Package” has been removed.
• With the improved software, brand icon in CarPlay screen has been updated.
• With the improved software, font and location of texts like i-stop, i-ELOOP and average data in Fuel Economy Monitor screen have been improved.
• In home screen, white stain appears at the status bar. • [MX-5 RF] When talking on BT hands-free, person at the other end hears strange voice like with echoes.
• [Mazda6 (VIN 600001-TBD)] Center display turns to a black screen due to that the back light of the display turns off.
• Display OFF setting is not kept when ignition switch is turned off and on before CMU goes into sleep mode.
• When certain language using Cyrillic alphabet is selected and USB is selected for audio source, index list for Songs or Artist screen etc. shows wrong character for “b”.
• [Ukraine] Key board shows wrong description for space key. • [V59.00.502 and later] When playing audio files in a USB memory device, it may take too long to start playing.
• When radio is selected for audio source and a hands free call is finished, radio sounds for a very short period of time even when it is muted.
• After engine start, navigation screen freezes at the loading status.
• When USB is selected for audio source, if the gear is shifted to reverse to display backup monitor while loading data from a USB device, shifting operation to drive or forward gear changes the screen to the home screen instead of the USB audio screen.
• When using 2017-Q2 EU or older map data, voice message for speed camera does not sound at certain locations. (With the improved software, customers need to update the map data to later version.)
• When an artist is selected via voice command for USB audio, wrong artist’s album may be selected.
• After parking, current location on navigation screen may not move until turning the ignition off and on.
• [Android Auto used at the south latitude or the west longitude] When ACC is on or engine is running in a location where GPS signal is unavailable, a wrong current location appears on applications such as navigation, weather forecast etc. When GPS signal becomes available, correct current location appears. (CarPlay is not applicable.)

If your region different from above – check other firmware. If your region is not in any of the listings – a photo with your current firmware (Settings – System – About System) 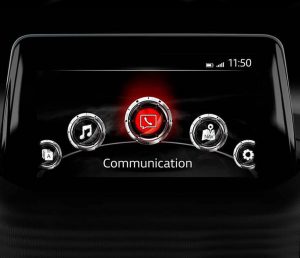